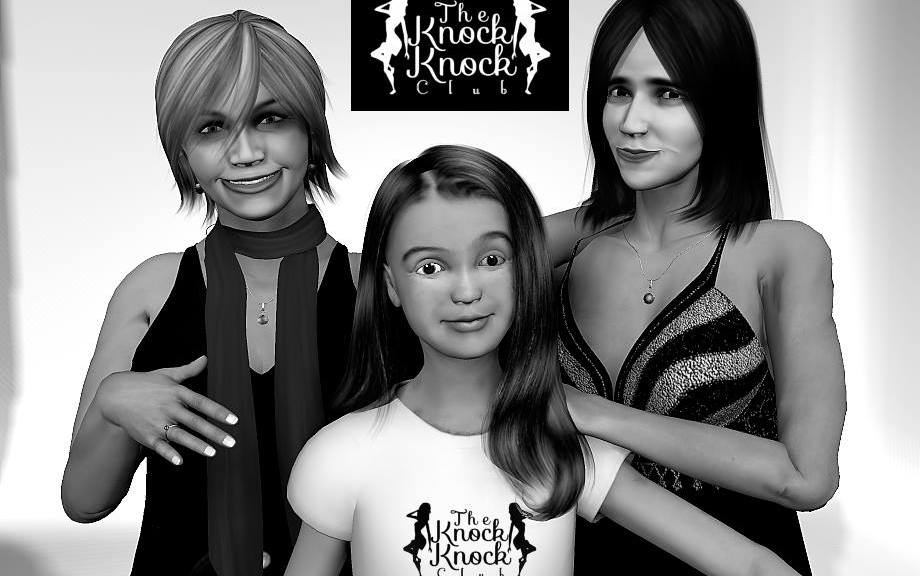 The route from the Shanties bus station, deeper into the poorest part of the Shady City was like an adventure. A thin veil of rain had started to fall and Tabitha’s hair was beginning to dampen. The darkness was heavy. The eerie monsters that haunted the area at night were casting shadows on the grey brick walls. Boarded windows. Broken doors. The whole place was so lifeless it seemed like no one actually lived there. It was when the Shanties opened up into Clifton Alley life sprang free. A buzzing sign read THE KNOCK KNOCK CLUB. Music was blaring within the belly of the benevolent beast of a building. Tabitha sighed. She was home.

She knocked on the door. A woman, scantily clad in the uniform of the Knock Knock girls answered.

“Over eighteens only,” she rhymed off.

As she started to close the door over TABITHA stopped her.

The Knock Knock girl narrowed her gaze on her. “We’re all someone’s niece, sweetness. That doesn’t mean we get in clubs underage.”

She attempted to close the door again but Tabitha stopped her once more.

“My aunt is the fucking Baroness,” she scowled. “Let me in.”

Her eyes widened. “I’m so sorry, sweetness. I had no idea. Come in.”

The Knock Knock girl opened the door and allowed entry to the kingdom Tabitha would one day inherit. The hall was hot, stuffy and stank of bad breath. The floors were sticky from spilled booze and the air surrounding her was smoky.

A delicate hand fell on her shoulder. “Tabs?”

Tabitha was greeted by a petite, pretty woman. AGNES WILDE was co owner of the club and partner to her Aunt TAWNY.

“I got the bus,” she admitted.

Agnes’ brow tightened. “You should have called and I could have come and got you. Those buses aren’t safe at night.”

Tabitha took in the rustic splendour that was the Knock Knock club.

“Is everything okay at home?” she could hear Agnes asking.

On the stage was her aunt in a gold sequinned dress and a feather band in her hair singing a song she had had on her lips often when they spent time together.

Tawny left the stage and was engaging her audience as the in house band kept the ambiance going. A spotlight followed her to a table near the front where she seated herself next to a man In a white shirt. He had removed his tie, unbuttoned the collar and rolled the sleeves to the mid point of his arms.

“How are you honey?” she asked.

The man smiled, giddy with nerves as all eyes fell on him.

“Fine,” he replied, still with a drunken grin on his face.

“Where are you visiting us from?” asked the Baroness.

The man gave another nervous laugh but he played along in good humour. “SWANTIN.”

“Swantin?” Tawny stood. “Jesus fucking Christ. We’ll let just about anyone in here.” She called to the bar. “Gemma? Lock that cash up we’ve got the Swantin folk in.”

The man laughed at the good natured teasing. She tipped him a wink. “Just kidding handsome. You have a good night.”

At that she moved on to another table. A young couple were seated, she in an elegant blue dress and he in a cotton shirt of similar shade.

“What about you folks? Come far?”

“From HATHFIELD,” the woman answered for them, enjoying the show and eager to get involved.

“The Bay?” Tawny cheered. “Haven’t been back in my old haunt in such a long time. McCurlies still there?”

The woman giggled. “Yes it is.”

“They have the best ice cream, right?”

The woman chortled and nodded.

“Get back on the stage!” Cried the compare from behind the curtain as part of the act.

“In a minute,” Tawny returned. “I’m chatting with my old friends here.” She turned her attention back to the couple, tutted and comically rolled her eyes. “Say hi to McCurlie for me.”

At that she stood. The music erupted again and she returned to the stage for the last of her song.

Tabitha smiled. In a grotty little place like the Knock Knock club all the comfort of home was to be found.

“You better wait back stage,” Agnes said clutching her and leading her to the back rooms.

In the back room a group of dancer girls were clucking around a mirror, covering their faces in make up so the heavy stage lights wouldn’t give them too much of a shine on their skin.

One of them, a raven haired woman with long dancer legs who was already caked in make up, pushed through.

“Move out of the way bitches,” she growled.

Two of the other girls stood aside, hands on hips, scowling.

“You don’t own the fucking mirror,” barked one.

“Well who’s fault is that? Get your face fixed and ready for the stage.”

That was when the girls noticed Tabitha.

“Is that little Tabitha?” one cooed. They surrounded her. “Oh we haven’t seen you in a long time.”

Normally when Tabitha spent time with her aunts they came to Filton. She usually only retreated to the club when there was trouble at home.

When she had gotten a little older Agnes tried to explain the relationship between she and Tawny. They had been lunching at Delphine – a Filton restaurant serving fine cuisine. It was the first time the two had ever been alone without Tawny despite knowing each other Tabitha’s whole life.

Tabitha stabbed her fork into her chocolate soufflé.

“Yeah I know,” she said dismissively. “You’re a couple of rug munchers.”

Agnes dropped her own fork. She knew Tabitha to be uncouth. Tawny found her foul mouth part of her charm. When Agnes told Tawny what she had said she almost spat out her tea.

“Is that what the kids are calling it these days?” she had said with laughter.

Tabitha could feel Agnes’ gaze still on her. She looked up with a forkful of soufflé to her mouth.

“That’s what you wanted to tell me right?” Not understanding what she had said wrong she added, “I don’t care. Aunt Tee loves you.” As harsh as she sounded at times that was all that mattered to Tabitha.

Agnes smiled warmly. “And I love her and you.”

“I guess that kind of makes you my aunt too,” said Tabitha with a mouthful of chocolate.

“I suppose it does,” Agnes agreed.

Tabitha grinned her distinctive gap toothed grin. “I like that.”

Agnes wiped her mouth with her napkin and picked her fork back up. “I do too.”

Pushing the dancer girls out of the way Agnes cried, “let her breath ladies.”

Bette took a lock of Tabitha’s hair and drew it through her fingers. “Doesn’t she have the most beautiful hair?”

From the door way a voice called out.

Tawny had a cigarette between her lips. As the dancer girls parted Tawny’s eyes widened at the sight of her niece. A broad, beaming grin stretched across her face. She snatched the cigarette from her mouth and reached out.

Tabitha ran to her and was enveloped in the show girl’s arms.

“You’re getting titty sweat all over me,” Tabitha giggled.

With both hands on her shoulders she danced her niece over to a changing chair and sat her down. She picked up a brush and started to run it through the young girl’s hair. They both looked at each through their reflection in the mirror.

Tabitha asked, “can I stay here?”

“Of course you can,” was Tawny’s reply. “You know you’re welcome anytime.” She leaned over and kissed her head. “Is everything alright?”

It would be now that she was behind the walls of the Knock Knock Club.

Tabitha had been allowed to watch the club close from the balcony. It was a surreal place when everyone was gone. Broken glass was swept up, empty bottles were carried out to the industrial bins in Clifton Lane. The spirit of the place quietened.

In the apartment above the club where her aunts lived Tabitha was given a fold down bed in the lounge area. Whilst Tawny made it up for her and Agnes crossed the Shanties to an all night pharmacy to fetch a toothbrush and some other necessities, Tabitha locked herself in the bathroom. She had been given an oversized Knock Knock t shirt to sleep in. She pulled off the damp leggings she wore, grimacing as she did so.

The bruising on her inner thighs seemed to be growing. She gently touched the worst of it sending a spark of pain firing through her leg. She didn’t sob then. She had wept enough on the bus journey. As she pulled on the t shirt she was glad that it was long enough to cover the bruising. She didn’t want Aunt Tee to know. She wasn’t ready to talk about it.

Not ready then but the little Boss Lady would grow up to be a whole lot of trouble.

Delve deeper into the darker side of the Shady City with the hit graphic novel series Knock Knock.

Free to read HERE on Vivika Widow Online or you can download for kindle by clicking HERE.

Knock Knock: Episode 13: Got the Fever 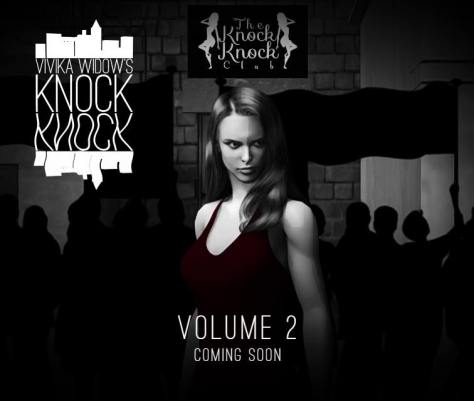 One thought on “Where you visiting from?”