He closed the door of the study over tightly. Leslie never bothered him when he was in there but he couldn’t take the chance. He picked up the old style rotary phone that was on his desk. Leslie loved vintage things which was why she always tied her hair in old school poodle style and why their home looked like the setting of an old sitcom.

He dialled his agent Harvey’s number first. The clinic would have to wait. After a few rings the man himself’s voice greeted him.

“Ah Laurence,” he began in his usually overly enthusiastic way. “Leslie was telling me you were unhappy on MARCH OF OUR TIMES.”

“Scarlett is a nightmare and Mark has no clue how to run a set.”

Harvey sighed sympathetically. “You’re on the soap opera scene now. Things are done a little differently. If it is really that bad I can talk to Finch and get them to write you out. He won’t be happy but your happiness is all that matters.”

Laurence gritted his teeth. “Do you have something else lined up for me?”

“No,” he said simply. “You’ve been working yourself mad lately. You’ll be no good to anyone if you put yourself in the hospital. Why don’t you just take a break? Give yourself time and I’ll find you a great part.”

He could hear Harvey change the phone from one ear to the other. He was wanting to make sure he had heard correctly. He could sense the frowning in Harvey’s next words. He could imagine the deep wrinkle the agent always got on his forehead when he was preparing to play hard ball. “That’s,” he considered his words carefully, “community theatre.”

“It doesn’t matter,” Laurence decided. “Is it still going?” The actor pressed through the agents disapproval.

“I’m sure it is. They would drop everything to have you in the role but …”

“Good,” Laurence interrupted. “Have them send me a script.”

Laurence shook his head. “If they want me that badly they will cough up a fee.”

Harvey laughed. A hint of nerves traced its tone. “Maybe we should put you on the negotiating side. Fine, since you’re feeling charitable I’ll see what I can arrange. Will I tell Mark to do one?”

The call was interrupted. A white tablet on the desk began to rattle as another call was bidding for his attention. Calls to the tablet were kept exclusively for Harbour House.

“I’ll stick with the soap opera. I have to go,” said Laurence to his agent before hanging up.

He flicked open the cover of the tablet and was greeted by a green HARBOUR HOUSE logo. He slid the answer button to accept the video call.

The logo was replaced by the face of a man in his early fifties. He had a long pointed chin that almost hooked. He would have been handsome if it weren’t for the fact he had shaved the moustache he normally wore making his long face seem even longer and sharper.

“DR WINSLOW,” Laurence was the first to greet.

The doctor grinned. “You know for a man who is in the limelight you are rather elusive Laurence. I have been trying to reach you.”

“I’m sorry,” said the actor sincerely. “I have been busy.”

It was then he noticed that the doctor was dressed his agent in surgical gear. One of his surgical team filtered past behind him.

The doctor swung the camera around to show a young girl lying on a surgical bed. She was crying out in pain. One of her legs had been removed. Winslow swung the camera back round to his own face again. “As you can see the young lady is in a great deal of pain. I may have been able to save her other leg but you, you naughty man, kept us waiting and we may have missed her chance. I needed to speak to you before amputating.”

The girl screamed like the victim of some cheesy horror villain.

“Are you sure you have to? I mean is it really necessary?” Laurence asked.

Winslow flashed a well polished grin. “If you wish for the young lady to live.”

Laurence couldn’t listen to her crying anymore. That was no acting.

“Fine do what you have to do to help her.”

“Laurence! I will make sure everyone knows about this!” She was screaming in the background as the surgical team began to administer pre med.

Winslow turned away from the camera and called back over his shoulder, “miss you really must calm down. That isn’t a nice way to speak to your benefactor now is it?”

He returned his vibrant stare back on Laurence. “This is going to cost,” he said. “Awful business but business none the less.”

Winslow beamed again. “Splendid. Then I’ll be in touch.”

The girl gave one last scream and the video cut off. Laurence dropped the tablet back onto the table. His heart was heavy and emotion was burning in his eyes. He wept unashamedly but the show would have to continue. Some wretched community play was not going to be enough and his wife was expecting him for cocktails on the patio in half an hour.

It had been a long night Leslie had gone home to COLDFORD to see her sisters. It seemed her baby sister, Laura, had gotten herself into trouble again. It left Laurence to attend a function for some new production the studio was looking to get up and running alone. Laurence had offered to join his wife but she refused his escort.

“Oh no Loo Loo,” she had said. “It’s just Laura being a brat as usual. Besides KARYN will be there.” Karyn was the eldest of the Doyle sisters and a HIGH COURT JUDGE. Whatever trouble Laura was in, this time if they had called in the big guns. Laurence didn’t envy his young sister in law.

She kissed him on both cheeks as a driver Grant – or was it Gil? – collected the matching LUEN designed luggage.

He had a rare weekend alone. Laurence wasn’t much of a solitary person. Ever since boyhood he liked to surround himself with people. Knowing he was going back to an empty, rambling beach house alone he loaded up more at the function than he normally would have. He noticed the looks on the studio executives faces as he tried to talk to them but made little sense of him.

Around midnight he decided to leave. He decided on a drive through the mountains. A monumentally stupid idea he agreed but alcohol had emboldened him to the danger and impending loneliness made his home seem daunting.

No one took his car keys away from him. He swerved along the road at too great a speed but luckily the roads were empty. It wasn’t until he returned to La Rocha Beach where he lived that he collided with a young girl girl named Gillian. She screamed as Laurence struggled to help her. Her leg was trapped. One of them was completely wrecked.

“I’m so sorry,” said Laurence repeatedly but she was in too much pain to hear him. Laurence called the only person he knew could help him, Dr Gregory Winslow of Harbour House clinic.

“Shut up!” Laurence barked at her. “I can’t hear what he’s saying.”

“Why don’t you call an ambulance? Whilst you are at it get the police down here!” Cried Gillian.

“It seems like the young lady is in a lot of pain,” said Winslow in honeyed tones.

“I can’t call an ambulance. I’ve been drinking. They’ll throw the book at me.”

Winslow tutted. “That is terrible. You should know the dangers of drunk driving. Weren’t you already given community service for that sort of thing?”

Laurence was frustrated. He was sobering fast, Gillian was still screaming and before long someone else would come along and see them.

“I don’t need a lecture. Can you help her or not?”

“I suppose with a man in your position I can understand your need for discretion,” Winslow agreed. Bring her to Port Rocha. I’ll have someone collect her from there. She will get the best of care here at Harbour House.

“She’s passed out!” the actor exclaimed as though he was reaching the back rows.

“Calm down,” said Winslow. “She will be losing a lot of blood. Tighten something around the worst of the wounds and get her to Port Rocha as soon as you can. I have a helicopter setting out immediately to collect her.”

Laurence was ready for hanging up when Winslow added. “Oh and Laurence, do drive carefully. We wouldn’t want any more little accidents now would we? You do realise this whole affair could have been avoided if it weren’t for your reckless irresponsibility.”

When he did hang up he struggled to free Gillian from the wreckage of her car and into the back seat of his own. She stirred again and she tried to hit him when she did but she was weak. As he tied a torn bit of his shirt around her wound she tried to escape his clutches.

Gillian’s leg was hanging limply. The femur bone was crushed beyond repair. He wrapped one of Leslie’s favourite picnic blankets around her as she started to shiver with shock. He sped off to the port. This time he navigated the roads carefully. The incident had left him as sober as he would ever be.

He wanted to save Gillian’s life. She would get the best treatment at Harbour House but that treatment cost. He had to replace his car. He had to replace Leslie’s favourite blanket. Then the costs of boarding at the facility came in along with invoices for surgical procedures, nurses time, after care, medication. The cost of discretion and covering up his mistake drew everything fine actor Laurence DuBoe had. It would only be a matter of time before they were drained dry and his wife found out. With the ever imposing JUDGE KARYN DOYLE looming over him who knows what could happen?

PART 3 will be available tomorrow from 6pm. Tune in to find out what our A list actor plans on getting out of this bind.

Check out some of Vivika Widow’s thrilling novels. 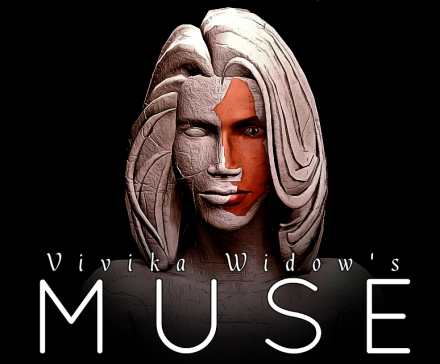 ClickHEREto readMUSEand join David as he tries to salvage his reputation in the art community.