Down in the South East, SWANTIN area of the Shady City lies the Chamberlain Docks. It is where you can catch the HAULAGE ferry to HATHFIELD BAY ISLANDS and further beyond to the sunny coastal city of LUEN if you’ve got the cash.

Swantin is known as the fashionable area of town. It has a trendy wine bars, boutiques and it is also home of the SWANTIN TOWN football team. Despite the glamour of the area there is a dark cloud that hangs over the docks – the looming, distinctive profile of HARBOUR HOUSE. Some call it a psychiatric institute. CEO and owner DR G WINSLOW calls it a rehabilitation clinic for those who have faced trauma. 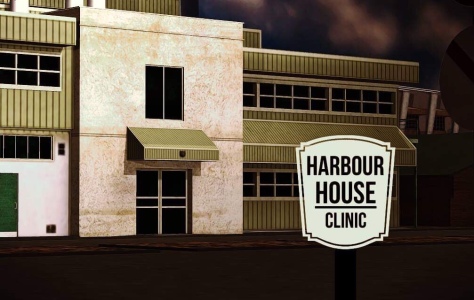 Happy Hathfielders and Coldford day trippers fill the docks and whilst the cheery travellers come and go no attention is paid to the illegal goods that are arriving regularly. Drugs, counterfeit money, human trafficking.

As the bustling day at the docks darkens down into night it’s not advisable to wander. It may be the fashionable part of the city but it can also be one of the most dangerous ones after dark. It’s the best place for prostitutes to ply their trade and who knows what you may pick up!

The Shady City has many exciting areas to boast but the all come together at the KNOCK KNOCK CLUB.

Volume 1 of the hit graphic novel series is free to read HERE on Vivika Widow Online or you can download for kindle by clicking HERE.

2 thoughts on “A Coast to Boast: Chamberlain Docks”